The trend of 'designification' explained (2)

Documentary Before the music died

Saw this one today and was amazed. It so much resonates with my earlier article about designification that I thought to post links here. Well, just have a look and see for yourself...
Previous article: The trend of designification explained


Interesting to hear elements such as:
- how has the music industry changed
- what happens nowadays to music talents
- view of the sorts of artists and what drives them
But also interesting for my own direction and to use as a lateral approach in the 'art industry':
- what solutions have been found; what is it that lasts

Well, although I am sure you could find all parts of the documentary yourself, I thought to paste the links all below, just to make it easier :) Enjoy, I will have another look at it soon. 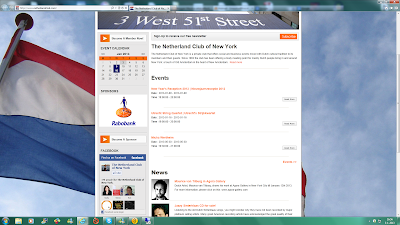 I have tried many things to promote my exhibition; as we had a gallery for a long time ourselves, I know that people are not just coming to watch an exhibition by receiving a mail.
Some of the specific marketing items used for my NYC exhibition:
- send personalised mailing early ahead of the opening; to allow people noting it in their agenda
- send reminder personalised mail a 2 weeks ahead
- give visitors a free smalldrawing (first 30 visitors)
- create interaction by asking my audience to pick he primary artwork for exhibition; with an art work as a prize
- handout the artwork during the opening
- use social media (twitter, facebook) to mark every promotional activity
- link invitation and marketing events to a blog with (at minimum) weekly content (having around 700 visitors now monthly)
- inviting close friends and tell them it is okay to bring their friends/contacts

One of the other things is that sometimes people help you; like in this case friend Alies sent the information of the exhibition to the Netherland Club of New York; and wow, they actually placed it on the home page. Thanks Alies!

As a consequence I had quite some visitors at the opening. And one of the other artist asked me "why is half of the gallery audience in continuously in your corner?". Which is a nice indication that all the efforts paid off.

Click here to go to the site. Exhibition running till 12 January.
My friend Alies had approached hem and nice to see they added it to the website.
Geplaatst door Maurice op 7:00 AM No comments:

The opening was a great success and many people visited. I did not really have a lot of time to make pictures during the opening, but some are included below, and 2 I received from Menzo Meijer.

Initially I sent the art works in three batches to the gallery, and some of them still needed to be framed. And then when arriving at the evening of the opening I was excited to see how the art works were hung. In a way I prefer when the gallery defines the hanging; sometimes artists are involved, and that always becomes an struggle - every artists wants the "best" location and can act quite hurt not feeling respected by the location their art works are shown.
It was great to see that all 6 art works were together, and directly visible from the entry in the far right corner. Also three art works had been framed by the gallery and the other elsewhere in New York. So I was curious how they would combine. Above you see a picture of 3; where the outer 2 are done by the gallery. I was happy to see the differences were minimal.
﻿﻿﻿﻿It was nice to see that even my busiest friends had found time to come by. Great surprise at the start when Catherine Kinney came by; I worked in her area some years ago and I remember sharing a passion for art. Great that she found the time, before going to a dinner, and was really nice to catch up. Many other friends a\came by that were not captured on pictures. Special reason to mention Chuck who has been supportive from the start, as well as Paul Noordam who actually helped delivering and packing the art works!﻿﻿﻿﻿

﻿﻿
Below a picture with John Merrell; I had asked people to help me select the primary art work that would be used for advertising, and he was the winner that got to pick an art work. Hope you still like it John!
﻿﻿

At some point I noticed the lights being switched off, and I looked around to see what happened. Then they told me it was 8 PM already and the opening had finished; well, a sign that time flew by when talking to all the visitors.
And then we went to Bottino's on 10th Avenue where also my Charlotte and latest arrival Astor joined us. When Astor had cried at the start of the opening Charlotte had left after a clear 'intervention' by the gallery manager. Well, it was a bit of an anti-climax, but no time to spend much time discussing this topic as people were arriving. Something to anticipate for next opening.

I would like to thank again all the people that visited the opening, and apologise not having time to talk to everyone. I will let you know as soon as the next NYC exhibition is planned.