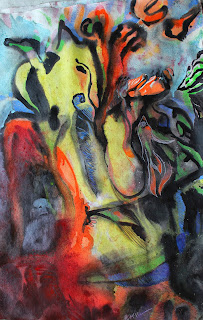 Recently I had been focusing on cartoons and on the Subliminal Transart concept. So I did not take time to make some more art works in the Subconscious Power concept series. A few weeks ago on a Saturday evening I decided to go out and start painting near the canal.

Before that happened I had actually decided to go to one of the galleries I sometimes visit in Amsterdam - the Go Gallery at the Prinsengracht. There was an opening of an exhibition featuring several artists and they announced the artists would be there. In general I like to visit openings; not so much for all the talking and commercials. Mostly as a source of inspiration and the ability to meet people that are interested in art and have either interesting things to say or provoking questions that trigger new explorations.
This time when arriving people were all talking in groups and it seemed the artist were very much talking with each other. So I started watching the art works. For several of the art works I liked the visual presentation; it was creative and stylish - basically well designed. It was basically consisting of black semi-realistic images where text was added. When looking at the text I was a bit disappointed, as it was always just a repetition of the same word or short sentence. The sentence was very clear in its message. Basically that is fine of course, if that is what the artist wishes to express, but I had hoped there would be more depth in the paining. Depth that you get when writing in the trance of painting, where you no longer rationalise but give up control and allow words to find their way onto the canvas. The words are then more likely to exceed the level of clichés and rational statements, but more reflect the feeling that the artist has about the painting. In addition it is less directive for the viewer and allows the viewer to freely interpret and reflect on the painting.

Well, why was this relevant? I realised when viewing that I wanted again to step into the creative process of Subconscious Power, where I avoid rationalising the object and design of the painting, but just let things happen on the paper.

And that evening I went out and took the paper with me, let it float in the water of the canal, I breathed the air, heard the wind approaching and jumped into my painting bubble.
First time I looked up and realised it was dark. I had been working for some time really absorbed by the paintings. Fortunately I brought some beers, so I sat down with the art works and enjoyed the sparkling taste of hop on my dry tongue, while looking at my art works.

It is always tempting to go back and keep adjusting the art work, but in this process of making I know that I need to stop when snapping out of my bubble. The things I would add or correct would actually harm the composition, make it less authentic and more 'clumsy'.

I had used this time also pure pigment powder on the top of the painting; I liked very much the rawness it brings as a red mist covering the painting in an irregular way. The only problem is that the pigment powder is very fine in its structure and basically ends up everywhere; in my clothes, on my shoes, in my apartment.

Recently I added the last layers and also fixated the pigment layer, which was quite a big job. But voila, pretty happy with the result. I explored with Charlotte what we saw in the painting; as the process is very much relying on my subconscious, there are many things in there that I discover later myself, and it was nice do stand in front of the painting and exchange ideas of what it would be.

As a result we decided we would call it "Long live the Quing". I will not explain why as I believe I should not ruin the freedom of the viewer to find his/her interpretation of the painting. And some of those interpretations might add to what I could discover in the painting myself so far, so feel free to leave comments with your views on this page.
Geplaatst door Maurice op 8:50 AM 1 comment: