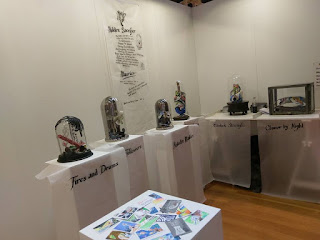 After quite some preparation I was finally getting ready for the actual opening day of the Amsterdam international Art Fair (AIAF). Signing up for AIAF was a great way to force myself to get some new art works created, like some people sign up for a marathon to create a sense of urgency for running. It had already brought me 6 new art works in the series of Hidden Sacrifice and a beautiful series of pictures made by Ariane James. The Thursday before the exhibition I also received the brochures of my new art works, as created by Jan Willem Put and his Ituri marketing team. Just fantastic to see the objects in such form and shape into a beautifully designed booklet. The Thursday evening ended with nice drinks on our patio with Jan Willem, Anna-Lisa and my own Charlotte, anticipating a vibrant event and a bit nervous of what it would bring us.
1. Anna-Lisa Unkuri joining
A few weeks ago my wife Charlotte, our small kids and I had been in Berlin to visit my oldest daughter Sophie that was having a nice Berlin-month before starting her new studies at University. We also met up with friend and admired Swedish/Finnish artist Anna-Lisa Unkuri, her joyful German husband Max and their small kids. I had felt like inviting Anna-Lisa to join me in the exhibition in Amsterdam but had felt reservation as I find her art to be of such a great level and expression...I did not want to give her the impression that my art would be of any similar level. Also I liked the expression and 'radiation' of her ar works that convey a certain stillness, intimacy and withheld intensity of the art works. Yet, despite my reservation, somehow discussions and drinks went in a way that I actually felt like suggesting her to join me...and she seemed actually enthusiastic. Quickly this idea became reality, and I think both of us were looking forward to this exhibition, with Anna-Lisa joining us in Amsterdam for preparations last Thursday.

2. The setting up of the booth

It was Friday August 25th. The planning was clear; we would arrive early at Beurs van Berlage to check out how the offloading of art works would work. Working in the Amsterdam city center on a daily basis I was somewhat worried that all road-works would lead to a dramatic chaos. Well, chaos was there but while taking a detour and driving backwards through the Beursstraat in the end we could offload pretty easily. And when starting to organise both Anna-Lisa and my art work to be displayed we exchanged ideas of how to set up the booth. I liked Anna-Lisa's non-obvious approach to concentrate my art works together as they really become a series. And keep her art works also concentrated. So, quite quickly tables and art works were assembled, canvas was stretched and the composition of our booth took shape. I have actually never experienced such a smooth process of setting up and exhibition and within 3 hours all had been set up; 2 hours

before the opening and at a time when other artists were still struggling. I liked the space we had created, the choices made to simplify (not adding for example the small art works of Anna-Lisa) and the contrast with many of the other booths.

3. The opening
Having had my most recent exhibitions in New York with Agora Gallery, it was actually a nice occasion to invite friends and people from my day-job's industry. People that would normally not travel to NYC to see some of my art works. We had quite a good turn-up of people, and in general the vernissage was quite crowded. Directly we received quite some feedback on our booth:
- it really stands out from the other artists due to its spacious set up and the atypical objects exposed
- the paintings of Anna-Lisa are really 'enchanting' and appeal to people; takes them to another world

- the objects in glass bells are really something exceptional, stand out and also trigger people to look closer and explore the philosophical ideas and reflections.
- the presentation really looks balanced and well thought-through.
All-in-all a great start of the exhibition, and great to see so many colleagues and friends, so excited about this exhibition and the art works displayed. Several people told us it was the best booth by far, but it is always difficult to tell whether people are just being nice or really objectively convinced.

Compared to Friday a surprising good turn-up of audience, with people that actually came to see the art having read about it in national newspapers and magazine. Many people were surprised by the Hidden Sacrifice glass bells and fascinated once I told them about the concept.

On Anna-Lisa's side it was clear that people were interested in her art works and touched by the subject, the stillness and the subdued expression. Many stood still in front of her art works for quite some time, then looking at the badge next to it to understand more about it.
Looking back I realise that in the whole art fair not much was sold. For art works like ours this is not a real surprise; prices are quite high so hardly ever people decide to spend so much on a spontaneous purchase. Best is to get them connected to the art work, give them some material or reference so they can have another look at home.
On my side I had made a limited edition, numbered and autographed brochure with all glass objects in there. Also I had brought my small-drawing business cards. When people really were interested I would offer them a brochure and/or a small-drawing. Overall it was a good sign that all 80 small-drawings were picked and some 50 brochures taken. Brilliant were some nice conversations with collectors or people really into philosophy, open to talk about the concept and underlying themes. This brings an opportunity to explore and sharpen ideas and have new thoughts on further developing the concept.
I observed that quite some people noted our stand was standing out in terms of quality, voicing terms as 'different in the type of art works', 'nicely decorated', 'clear and warm expression'. Also especially people more interested in art would indicate that much of the other participants were still in a phase of mastering their craft. On my side I like the inclusive nature of the exhibition, and it allowed me to exhibit this time in The Netherlands as recently my exhibitions had focused on NYC through Agora Gallery. 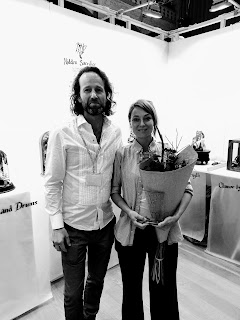 The final!
Really great was the moment that Anna-Lisa, my partner in all this, received the second prize in the art competition. Knowing there were some hundreds of participants it is great that the jury recognised the strength and radiation of her work.
And for us a good reason to end the day with a tired yet excited smile and a glass of Champaign!