The Hidden Sacrifice concept is like many of Maurice van Tilburg-Glimne's concepts part of his personal learning; his meaningful journey. The conceptual reflections are useful to deal with challenges in his role as a senior manager in the financial services industry. This concept is about his exploration of the relationship between humans and animals. Starting from a wonderment about the way animals and animal products are a normalised part of everyday consumption, he investigates drivers and patterns influencing human behaviour. Themes linked to Heidegger about structuring our lives and at the same time removing our reflective capabilities, the hunter-gatherer origins as well as the 'cognitive dissonance' all influencing the way we deal with animal suffering. The objects are materialised thoughts of the artist in discussion with himself, using literature and research as means of reflection.‎ For this concept the artist retrieved original stories in the Bible and the Quran about Abraham being commanded by God to sacrifice his son (Isaac in the Bible, Ismael in the Quran). Eventually he is stopped and 'allowed' to sacrifice an animal instead. In combination with other religious stories about sacrifices and animals this highlights the spiritual sensitivity linked to sacrifice or killing of animal life. Van Tilburg-Glimne uses parchment as key material for his art works. Parchment has been the 'paper' used for some centuries by monks and book copiers. Before actually starting the creation he prepares the parchment in accordance with ancient rituals as described in religious literature, whereby the animal is sprinkled and 'burnt'. He also adds writings on the inner side of the skin using texts and decorations relevant for building of personal insights related to the theme. Once all preparation is done Van Tilburg-Glimne paints, cuts and burns the parchment until it has the right shape and form.

Van Tilburg-Glimne obtains parchment from an American traditional producer that solely creates parchment. Parchment is a sensitive material and not suitable for just any type of decoration. It mainly consists of collagen, implying it needs to 'breathe' and as a result he uses traditional inks instead of oils or other substances that would deform or isolate the parchment. An important element for the artist is also the link with crafting of leather that brings him back to his grandfather that expanded his Swiss family business by building a new leather factory in the south of The Netherlands.In addition to parchment the artist includes other objects that are relevant for his personal reflection and journey, like antique 18th century VOC coins. Every object tells its own story. 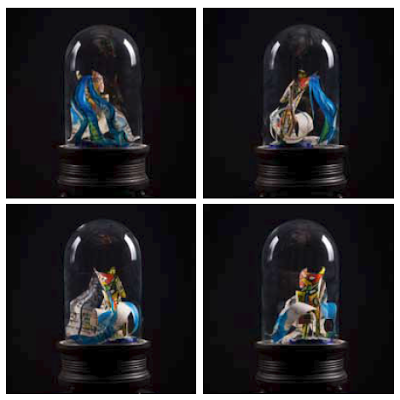 Nowadays distance between artist and audience is large, and development of art goes faster than the related knowledge of the art-lover. The question is if and how to bridge that increasing distance, especially when art aims to convey a certain message. Van Tilburg-Glimne wishes to entice the viewer through his 'magic' objects, making them engage in an exploration to understand the meaning of the object. The stories of the objects are kept a secret to allow sufficient space for the viewer's imagination.
Hidden Sacrifice objects are displayed in and with old glass bells, originally used for display and protection of religious artifacts. The glass bells also refer to the planet's atmosphere and protect the parchment.